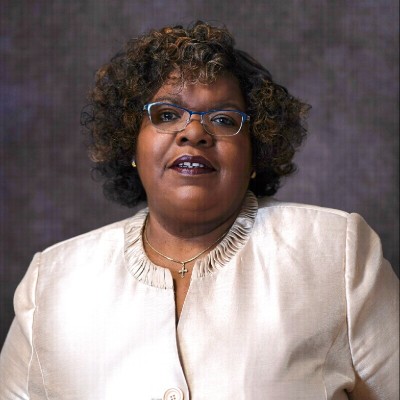 Barbara Jean Wilson served as an executive coordinator in the Legal Division of Freddie Mac for fifteen years and retired on March 31, 2020.

In 2011, Barbara published her first book, Mute But Now I Speak, and in 2020 completed her second book, Blessings After Going Through The Valley.

Her testimony reveals how she overcame the pain of childhood sexual abuse and human trafficking and receiving the blessings of God.

Barbara has spoken at the United Nations in New York, Department of Justice in Washington, DC, as well as in Albuquerque, New Mexico.  These along with other speaking events focus heavily on bringing awareness to the challenges of human trafficking, sexual, physical, and mental abuse, and the overwhelming impact on the victims and survivors, as well as the community.

In addition to receiving numerous awards for her hard work and dedication while working at Freddie Mac, she won Woman of the Year by the Women’s Interactive Network (WIN), having been nominated by her peers and colleagues at Freddie Mac.  During this event, Barbara was a featured panelist along with the Prince William County Chief of Police, to discuss human trafficking and sexual abuse.

She received an award for her special service to the community and the positive influence made to the many lives through her work by WUAWSU Project, Inc. (WPI), headquartered in New York City.

Barbara is the Chairwoman of Anti-Trafficking International (ATI).  She is also a board member of Reset180 (formerly Northern Virginia Human Trafficking Initiatives) and advisory board member on the National Child Protection Task Force and Director of Victim Advocacy Resources.  In addition, she is an active member and speaker for RAINN (Rape, Abuse & Incest National Network), which is headquartered in Washington, DC.  Her community involvement also includes serving as officer and Secretary on the Board of Directors of WUAWSU Project Inc., and as District 16 Anti-Human Trafficking Task Force Steering Committee Member for RCASA (Rappahannock Council Against Sexual Assault) and CVJI (Central Virginia Justice Initiative).

Barbara’s books are available for sale at Amazon:

Mute But Now I Speak

Blessings After Going Through the Valley

You can also visit her website at www.mutebutnowispeak.com or reach her by email at [email protected]